The Book of Ampersands 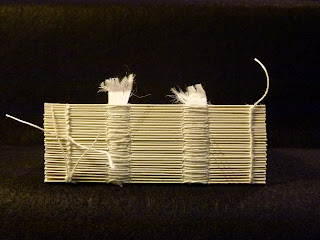 I recently reread Simon Garfield's Just My Type, a quirky book that breathes life into the arcane mysteries of fonts. I was taken (again) by the author's reflection on the delights of the ampersand - 'Done well, an & is not so much a character as a creature, an animal from the deep. Or it is a character in the other sense of the word, usually a tirelessly entertaining one, perhaps an uncle with too many magic tricks ...'
I decided that the ampersand deserved a book of its own and that I would make it. After much playing around with options, I've settled on a binding in the French Simplified style that will hopefully be heading for an exhibition at the Art Gallery of NSW later in the year. I've now printed images of 223 ampersands onto sheets; folded and cut the sheets; assembled the sections; and (this afternoon) sewn the block onto tapes. It's a great feeling to have a new work underway.
Posted by BEMBindery at 00:38