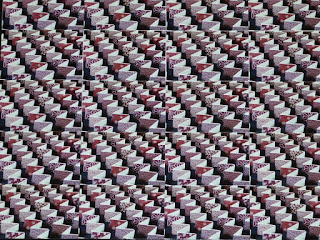 It's that time in December when anything in the bindery that is not finished now won't get wrapped up until next year.
This week's image is of multiple copies of BEMBindery's 2012 Christmas card. The card features a photograph of Curtains, a work that gave me great pleasure in the making. Its components parts have been posted around the world to their new owners and the card is a satisfying reminder of the work's brief existence.
I'm now going to take a break for a few weeks to spend time with family, get in some bushwalking and sea kayaking and just lie on the beach for a bit. I hope to be back towards the end of January.
Posted by BEMBindery at 21:23