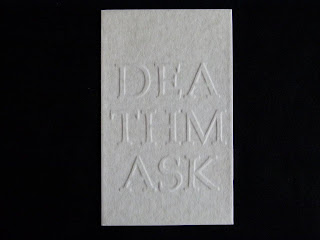 January at BEMBindery has so far been spent wrapping up stalled projects from 2012 to make way for the half-formed ideas that hopefully will turn into 2013's new works.
DEATHMASK is one of these stalled projects. It started in the second half of 2012 under a different working title, changed its form after I was unable to secure all the copyright permissions I needed and then sat gathering dust in a corner for a couple of months. I picked it up again last week without much enthusiasm but had great fun yesterday with some relief lettering on an inlay panel for the lid of a box that will house the finished work.
Posted by BEMBindery at 16:47