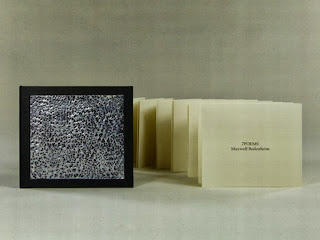 This week's image of is for Martin, who was taken by a detail of 7POEMS that featured in an earlier post and asked for some more information.
Completed in an edition of five, it's a simple work consisting of a clam shell box that houses eight accordion fold loose leaves (the seven Maxwell Bodenheim poems plus a title-index-colophon).
7POEMS grew from frustration at being unable to secure a 'licence to use' for part of the text of a planned work and a subsequent on-line search for 'poets-who-died-in-1953'. For those unfamiliar with Australian copyright law, the 2004 US-Australia Free Trade Agreement extended the 'copyright-after-death-of-the-creator' period from 50 to 70 years, meaning that new 'out-of-copyright' material will be not become available in Australia until 2024.
7POEMS is currently part of an exhibition at Artisan Books that runs until 12 October.
Posted by BEMBindery at 22:56