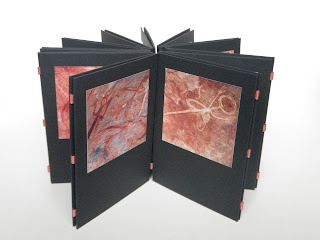 Little bit long way is how Australia's Wunambal people describe the vastness of Ngauwudu, their traditional country. In mid-2010, I had the good fortune to spend three weeks in Wunambul country visiting rock art sites not known to have been previously seen by non-Aboriginal people.
As a way of celebrating the richness of what I had seen, I put together a small photograph album at the end of the trip. Despite its apparent simplicity, the resulting concertina binding is one of the more complicated of my books. Each of its twenty leaves consists of a nine separate layers, laminated in a way that allows the leaves to remain flat and flush, even if displayed under less than ideal environmental conditions. Gros grain ribbon was used to hinge the leaves.
Little Bit Long Way: the Ngauwudu Photographs was exhibited in Sydney in 2010 and in Canberra in 2011.