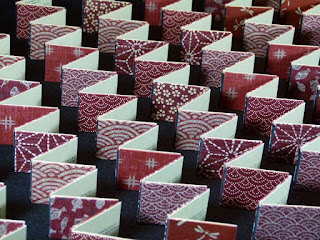 Curtains, my second work for BookArtObject Edition 4, is done! It is a reflection on the nature of BookArtObject, shaped by four questions I set myself at the start of the project:
1. The logistics (and cost) of posting parcels around the world means that BAO works are mostly small in size. Is this inevitable or is it possible to produce a larger scaled work?
2. The splitting of a large number of BAO artists into sub-groups means that the work produced is mostly shared only with the others in the sub-group. Is it possible to produce a work that is equally accessible to all?
3. One of the defining features of Sarah Bodman's An Exercise for Kurt Johannessen (the starting point for Edition 4) was its ephemeral nature - it ceased to exist almost as soon as it was created. Should (and if so how should) this be acknowledged?
4. Editioning can be tedious. Is there a way of making the end point seem more than the satisfactory execution of a multitude of repetitive tasks?
The result is an installation that existed for the time it took for a record to be made of its existence. Its component parts are now in Queensland, New South Wales, Victoria, the Australian Capital Territory, the United Kingdom and the United States.
More photographs can be found here.
Posted by BEMBindery at 23:46