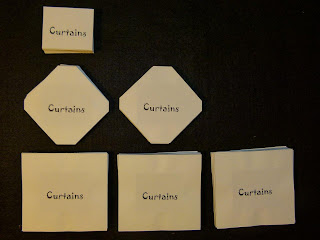 The forwarding part of many editions involves lots of repetitive, not-especially complex tasks that don't require a lot of concentration. The risk of error is relatively low and the challenge is to avoid becoming too bored. My mind inevitably wanders and I find myself making multiple mental calculations of how far into the task I am and how much remains to be done.
This edition of 10 will use a total of 180 paper covered and 180 cloth covered tiles. Two passes of the board cutter are needed to make each tile (720 passes); the paper and cloth covers are then cut with a craft knife or rotary cutter (360 cuts); the covers pasted on to the tiles (360 pastings); the corners of each cover trimmed for turning in (1440 trimmings); and each of the cover sides turned in  (1440 turn-ins). If I allow a 5% overrun for the inevitable mistakes I make and the flaws I find, I will have performed in excess of 4500 separate operations before I get to assembly and finishing.
Posted by BEMBindery at 22:57